Grunt loves data. At a very deep level Grunt understands that data is dynamic - that it can change, rearrange, grow and shrink. Unfortunately, most presentations are created using objects that are agnostic about the data they contain and represent. Once the data changes, this agnosticism starts working against you. Anyone who's spent time creating and maintaining presentations knows this to be the case; once your data changes you can end up wasting hours readjusting your design. Grunt exists to solve that problem.

Every design choice in Grunt can be made with a rule. In essence, a rule is a really powerful form of conditional formatting. Rules can be applied to almost anything, even to other rules. That way, you can compose rich and dynamic visualizations that are reactive to changes in your data. It's much faster than moving boxes and lines them around in PowerPoint, and it's certainly faster to update.

The Visual Grid is the main workhorse in Grunt. It's incredibly versatile - it can be almost anything you want. It can be a single chart, or it can hold shapes with text, or a combination of charts, shapes, and text in a single object. With the Visual Grid, you can easily achieve great layouts and visualizations that blend text, charts, icons, shapes and images in a single rule-based object.

You can get the data for your Visual Grid either from an external data source such as Excel – or it can be typed in directly in PowerPoint.  We will now take a closer look at how to create a Visual Grid with data directly typed into PowerPoint. But if you want to copy your data from Excel - read this support article on how to insert a visual grid with data linked from Excel.

The simplest way to create a Visual Grid in Grunt is to insert an empty grid.

Go to the Grunt tab and choose Visual Grid. You can now select the number of rows and columns you'd like. Don't worry too much about getting it right - you can easily add or remove columns and rows later. If you prefer to start with some kind of layout, select one of the available styles. We will continue this walkthrough with a plain Visual Grid.

Adjust the size of the object and place it somewhere on your slide. If you want the Visual Grid to fit an empty content placeholder, click on the icon in the top left corner of the placeholder.

You should now have something that looks like this: 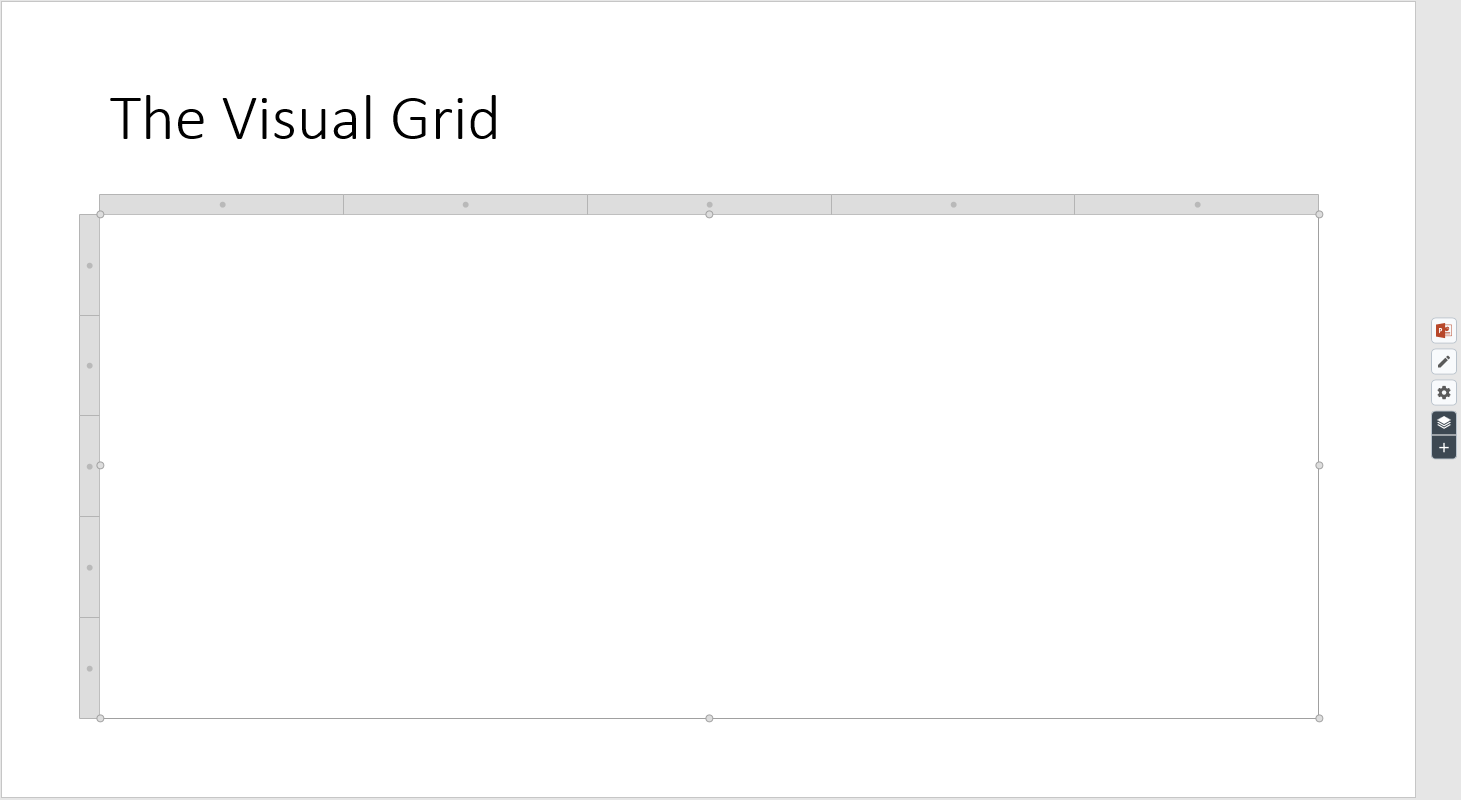 As you can see, the grid is empty. We'll deal with that shortly, but let's first take a closer look at what you can currently see. When your grid is selected, some buttons show up all the way to the right in the slide view.

The top-most button (which displays a PowerPoint icon) is where you manage the data source. Because this grid is embedded, there's really not much to do in there, but if the data source you were using in the current grid is shared with other grids, this is where you would see that - we'll talk more about sharing of data sources later. Go ahead and click the button to have a look - you should see something like this:

As you can see, the data source says that the data is embedded. In other words, the data lives inside your presentation and can be shared among the Grunt objects in the presentation. It also says that there is currently one grid using this data source - namely the grid you just created (look at the green part to the bottom of the data source dialog). If there were more grids using the same data, the number to the right side would reflect that.

Clicking the "Edit Visual Grid" button (or the F3 hotkey on your keyboard) opens up a spreadsheet where you can edit the data in your Visual Grid. The spreadsheet is "live", meaning that any values you enter in the spreadsheet will automatically update in the Visual Grid once you commit them (by pressing Enter or Tab).

The Rule Stack is where your design rules will show up when you start adding them. You can add one by clicking the + icon at the bottom, or you can use the hotkeys Ctrl+Enter. We'll come back to adding rules. The important thing to remember with the Rule Stack is exactly that - a stack of rules. That means that when you add rules, you stack them on top of each other. Rules are applied by Grunt bottom-up so that rules further to the top may "overwrite" those further down. We'll take an in-depth look at rules and the rule stack later.

This is a more advanced dialog, that you probably won't use that often. In the settings dialog, you can choose which part of the data source each row and column should display. You can also manage your tags. Grunt's tagging system allows you to tag certain regions with a name and reference it later with rules. It's a slightly more advanced feature that we'll return to later.

Articles in this section

Was this article helpful?
7 out of 7 found this helpful

Have more questions?
Submit a Request